This story was prompted by Hélène Vaillant’s weekly photo prompt challenge, “What do you see?” 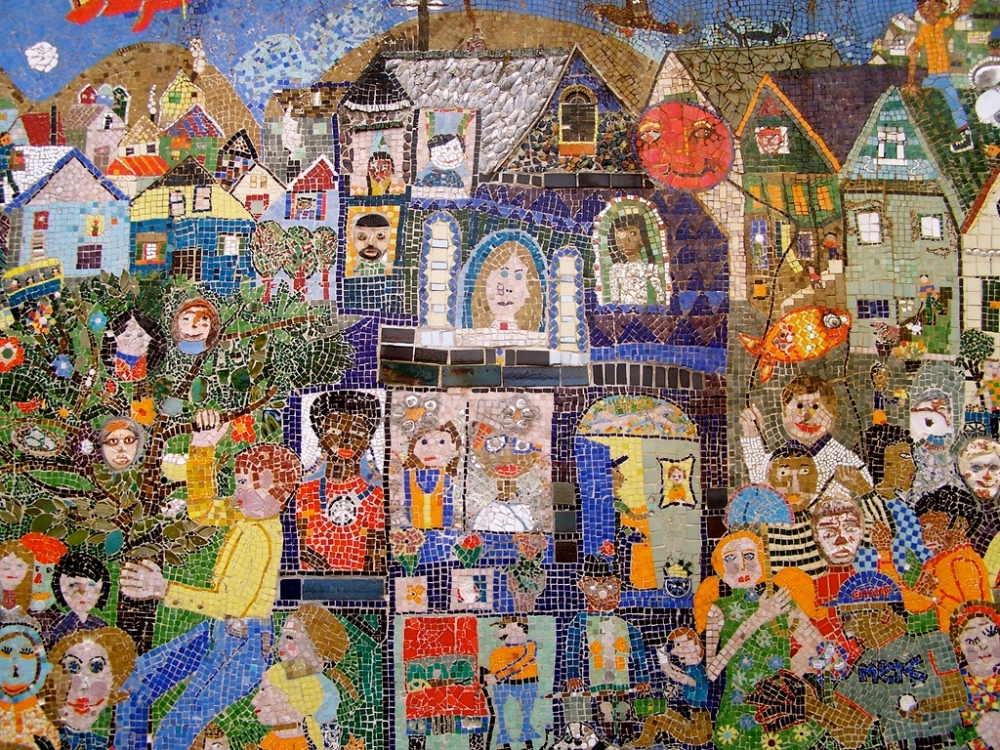 I was but a wee five year old when my parents moved our family to San Francisco. It was 1968, and we moved right into the heart and soul of the Hippy movement in the Haight Ashbury.

One would think that two immigrants from Jordan, moving to San Francisco during a highly charged era would have had caused them both to have apoplectic fits.

But oddly enough, since my Mother was an artist, she was very captivated by the hippies. She became very close with our neighbors Kathy and Maury who lived in the flat next door.

The flats in San Francisco, had walkways with railings that connect all the flats to the flats next door. It was interesting living because you were very close to your neighbors. This felt like home for my parents because back home it was similar, everyone was an Aunt, or an Uncle or cousin, even if they really were not genetically related.

Kathy also was an artist, and a hippy. She had very long flowing hair and didn’t wear a bra and tried to get my Mom to give up her Playtex 18 hour lift and support bra, but to no avail. Mom was set in her ways including the “bouffant do.” Even with these differences, they became best of friends, which lasted even when we moved to the suburbs a few years later.

Her husband Maury was a professor at UC Berkeley and he had a full on afro although he was caucasian, but had very tight curly hair. He and my Father would talk politics for hours. Maury was a kind and generous man and on the weekends, he would often take our family to San Francisco’s special places, Lands End, Ocean Beach, Golden Gate Park, and The Exploratorium. Indeed, he influenced my older sister over the years and helped her prepare for acceptance into Berkeley. Which she achieved after she completed high school.

For me, at five years of age, San Francisco shaped my personality and my interests over the years. Really, who I am still today. During the summer, we signed up for day-camp, and of course the teachers were hippies. I learned about acorns and seeds, and we would take long walks in the park and find leaves that took our interest so we could draw them later, we listened to musicians playing drums in Dolores Park, and I even got to sit in Carlos Santana’s lap.

When we started school, as a kindergartner, I got to participate in creating a beautiful mosaic. In fact, the one you see here. It was 1968, at Alvarado Elementary School in the Noe Valley. The San Francisco Unified School District set aside funds for Artist Ruth Asawa to lead an art program at the school that indeed continues to this very day with her son Paul Lanier taking the helm. This is no small feat with School budgets for the Arts next to nothing in most school districts across California.

But the true test of a piece of art is how it is interpreted by the community. And reading through everyone posts, I see it represented well in their poems and words. Indeed, I consider our blogging community full of artistic and creative, like minded people joining together to create our special community.

Getting to participate with creating this mural, taught me all about inclusion because the public school had people from all walks of life. It taught me that we live through and with our community. Just as you see the older Victorian buildings showcased, and interspersed with children, teachers, and flora and fauna.

I loved sgeoil’s poem as she captured it perfectly. I wish we could send it to Ms. Asawa now to thank her. Indeed, in 2000 they started another mosaic at the school, and the Principal shared,

“This mural shows what wonders children can create when working with artists and using their left-brain and right-brain skills,” says Alvarado Principal Phyllis Matsuno. “The mural project has had an incredible positive impact not only on the academic achievement of the students, but also on our school spirit.”

If you would like to read more about the mosaics; here is an article from 2000.

Thank you, Hélène for sponsoring this special moment and once again providing a sacred space to share our thoughts and creativity.