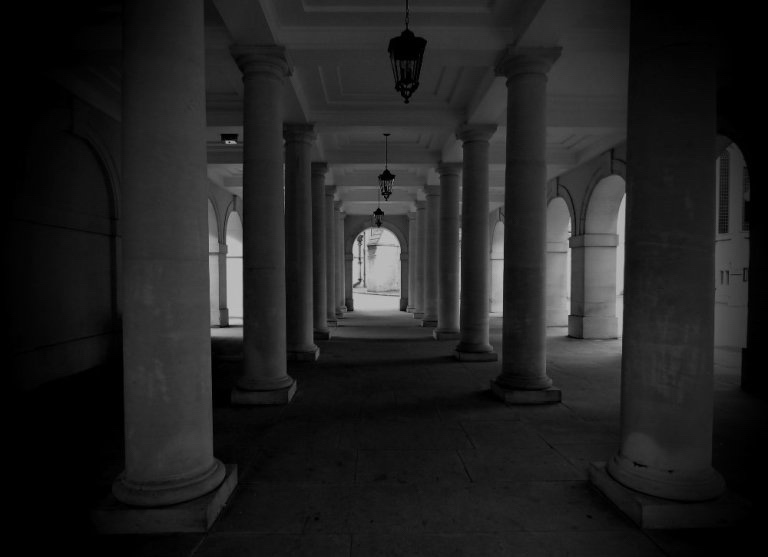 A Confabulation of Stone

I was standing naked inside this corridor lined with stone pillar after stone pillar. It was a dark place and while I could see the exit, it too was blocked by yet another stone wall.

It was a cold and musty place, and it seemed as though I’d been standing there for years. Somehow I was supposed to walk through this seeming gauntlet that my brain created, a challenge the personality put upon me. Yet, I felt small and alone surrounded by these pillars of stone, motionless in time.

Actually, I felt so paralyzed that even the personality’s personality was stuck. There was not one soul in this barren place, not one stream of light that I could possibly latch onto.

How did I come to be here? Even in the silence, I could hear the wicked laughter of those taunting me to move on. “Carry on,” they said over and over again, “carry on, dear.” As my legs were immobile, even my heart stopped racing, it seemed that I was frozen in time, indeed I too was becoming a pillar of stone.

Although, every now and again a butterfly would glide through, and wind around the pillars, yet never coming close to me.

Maybe, I really don’t exist, I thought. Maybe this place is a place where I don’t exist. Yet, I seem to remember a different place, one that was teeming with life.

With nothing left to do, I forced myself to try and see that other life within my minds eye. Something was there, something that was beckoning me to call to it, something I seemed to know and if I could just remember. How is it that I once existed? What was this other reality?

I kept asking these questions, conscious that my body was very cold, and that whatever life I had left in me was seeping into the stone.

Alone, I felt completely alone. But there was a time, somewhere seeming long ago that somehow was once my life. Where was that, where is home? How do I even know there is a home?

And there was the butterfly again, gliding in the distance. Desperate, I called to it, but no sound formed, just a lump in my throat. But then I forced my concentration to call out to it, my mind sent waves of beckoning. It must hear me I thought, it must, it is my only salvation, the only other life form in this corridor of stone.

Time stood still, I no longer knew where I was or that I should still be engulfed within a hall of pillars. Suddenly, a silver thread released from the butterflies head, stretched out and attached itself to my forehead, directly in the center of my physical eyes, and then different images began to emerge.

I noticed that I was no longer seeing with my physical eyes, but rather my mind was dazzled by the prism of light that was permeating my brain. Within were the colors of the prism, and the neurons that animated my body were ignited.

With this, a rapid fire blazed within my entire body. My lower back arched, and my arms began to raise up toward the ceiling but as I looked up there was no ceiling, and as I looked around there were no longer any pillars. Only blue sky and fresh air.

My body continued to transform, it was somewhat painful but with every change, every synapse, I became more and more alive. And while I could no longer see the butterfly on my arm, I realized that I no longer had an arm, but rather it appeared to be a wing. Moreover, I instinctively knew that I had the capacity to fly.

From my university studies, I knew that framing the question correctly would yield the best answers. And as I asked about where home was, knowing that it was certainly not within the confines of the stones, a transformation was initiated.

As I called out for home, the universe answered. Now transformed, I saw that I became stuck in a place that really didn’t exist. Rather a confabulation of my brain stemming from traumatic events. Those inevitable occurrences in the material realm that seem real but are nothing but traps that make us immobile.

I can see now that it is spirit, trust in knowing and universal intelligence that hold the key to transformation.

Indeed, transformation is fluid, it is cellular division, it is life affirming not dead, only transitional. The confines we place ourselves in are just confines of the personality and contraction from the pain of separation.

Transformation is within our grasp, but we must have the desire to ask, turn off the internal dialogue, listen and accept the true light of being, and eternal love.

15 thoughts on “A Confabulation of Stone”