This is my entry to Sue Vincent’s weekly write photo prompt. https://scvincent.com/2018/10/18/thursday-photo-prompt-glimmer-writephoto/ 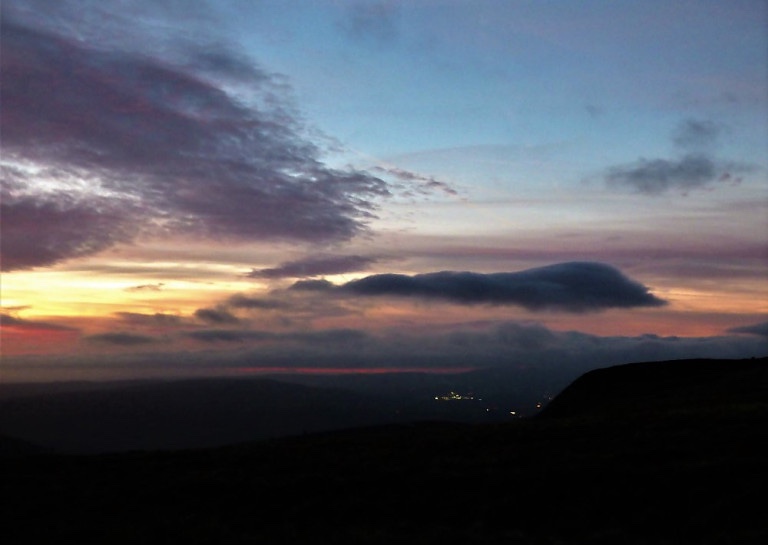 It was 3:00 am when I awoke from a dreadful dream. My body was drenched and my heart was racing. A voice screaming for help reached out from the dream and caused me serious angst. I continued to lay still in the soaked sheets, afraid to move, searching the recesses of my mind, trying to find a thread to those screams.

An image of a car popped up in my head. The trunk was open, and the outside had been charred, apparently it had been on fire. Did someone start the fire? What was in the trunk? I tried to guide my mind to look inside but my head began to swoon and I felt nauseous. I had a horrible feeling something was wrong,

I stayed with the image, rather than focus on the car, I began to search the surroundings. It was a desolate area in the mountains, a place I knew well. The image of tall Sequoias made me realize it was near a range not far from my home.

Not quite sure what compelled me to rush to my car and drive at that hour of the morning, but I knew something terrible was happening. I drove fast along the winding roads, sensing my way to the place where I might find the scorched car.

Forgetting my eyeglasses, I had to squint to see in the dark, but soon saw a figure up ahead alongside the road. As I got closer, a young girl with matted hair, half dressed and badly injured was flagging me down.

I pulled over, my heart was racing faster, I could hardly breath or contain my fear as my legs went slack. It took a lot of strength just to stop the car. I rushed out toward her and she stood there looking at me, with her glazed eyes and dilated pupils. Just as I came upon her she fell forward into my arms and began sobbing. I held her for a moment but knew that I had to get her out of here, out of danger and to a hospital.

I led her carefully to the car, afraid to worsen her injuries. She tried to speak but I asked her to save her energy as I tried to lay her down in the back seat. But she wouldn’t have any of it, fighting and with barely any breath left, she managed to say, help, he burned her alive. I almost vomited as I remembered the burnt car from my dream but managed to ask, where?

Just then we heard a rustle a ways off in the bush and I hurried her into the front seat. I managed to run to the drivers side and lock the doors. Just as we sped off, a savage looking man jumped out onto the road. I tore off with wheels screeching.

My head was now pounding with my heart in my throat, I tried to get focused. The young girl was falling out of consciousness fast. But I wouldn’t dare stop to treat her wounds. Finding my cell phone, praying for bars, I dialed 911.

“What’s your emergency?” the operator asked. I explained what had happened and gave her the man’s location. I also managed to explain that the young girl I found had serious injuries. And finally spit out that there was likely a burnt car at that same location with the possibility of a body in the trunk.

The operator asked more questions but I said that I could hardly breath. I had to get this girl to the nearest hospital. She asked me to wait for paramedics but I wouldn’t dare. It was still dark out and we were in the mountains, who knew if he had a car.

She explained that she dispatched the police and fire department but would stay on the phone with me. I put her on speaker and gave her my exact coordinates so she could guide me to the nearest emergency room.

Those minutes attempting the drive to the ER felt like hours. The girl was out cold at this point but I could hear faint breaths. Knowing she was still alive, I kept driving as fast and safe as I could on the mountain roads.

But then a police car and ambulance were behind me with their lights blaring. The dispatcher confirmed that it was safe to pull over and that she had given them my coordinates.

I pulled over and my car was immediately surrounded by first responders. A few were trying to talk to me but I was too worried about the girl to focus. I looked over and they already had her on a gurney and within a matter of seconds they started an IV and wired the EKG. It turned out that she too was badly burned. They carefully took her clothes off, dowsed her with saline and threw a burn blanket on her to keep her warm. Knowing she was safe, I turned my attention to the police officers.

One of them asked how I was doing, but I could hardly speak. The paramedic gave me some water and took my vitals. He asked if I wanted something to calm me and I agreed.

After a few minutes, I shared what had happened and they confirmed that they found the car with a body in the trunk. They also found a purse on the ground nearby and thought it belonged to the body. They identified her as a woman in her forties. I said she might be the young girls mother. And then I asked if they found the man. They had not but were combing the area.

I considered whether to tell them about my dream but decided it would not be a good idea. I knew they would not understand that I am psychic and that these hills are my energetic home. I was sad as I thought that I should have sensed evil lurking much sooner. Maybe, I could have stopped it from happening.

A policeman spoke breaking into my thoughts. He asked where I was heading that time of night and how I happened upon the girl. I answered that I have difficulty sleeping and sometimes I drive to calm my mind. He asked me for my ID and after taking a few minutes to run a background check, he returned it. He then said he recognized me and asked if I volunteered with the forest Rangers. I said yes, and then I recognized him as well, another volunteer Ranger. Of course this eased his suspicions and he began treating me as a partner.

He was kind and said, “You should go to the hospital too, you seem very shaken, one of us will follow you in your car.” “May I go with the young girl?,” I asked. But he shared that the ambulance had already left as it was a code three. I realized that I was so out of it, I didn’t hear the sirens as they rushed off. I agreed to go to the hospital and he walked me to the ambulance. I climbed inside and laid down on the gurney, my head was still spinning.

I listened to the emergency radio as the calls came through. The ambulance with the girl rang down the hospital and were only two minutes away from the ER. She would have died in my car if that dispatcher didn’t send them to us.

Another call came through, it was a team of scouts who located the man. He was hiding in brush near the car. He was completely undressed, and was muttering incoherent threads. The scouts heard him and followed the sound. His ID indicated that he was likely the women’s husband.

Again a call came through, the young girl came to, and her name was Sara. Knowing that we were close to the hospital, I sat up and looked outside the window. I could see lights in the distance, we were almost there, it was almost morning.

I would stop to see Sara in the ICU if they would let me, and thought the only glimmer of hope is that she may live. Although, the scars will take a long time to heal, if ever. I will help her any way possible and if she doesn’t have family, she can stay with me.

I continued to look upon the lights glistening from the town in the valley below. Further in the distance, a glimmer of daybreak began to peer through the dark clouds. I thought about light, no matter what evil awaits there is light. Light that shines through darkness and beckons a new day.

25 thoughts on “Nightmare in the Mountains. #write photo prompt Glimmer”