This is my contribution to Diana from Myths in the Mirror’s wonderful writing prompt. 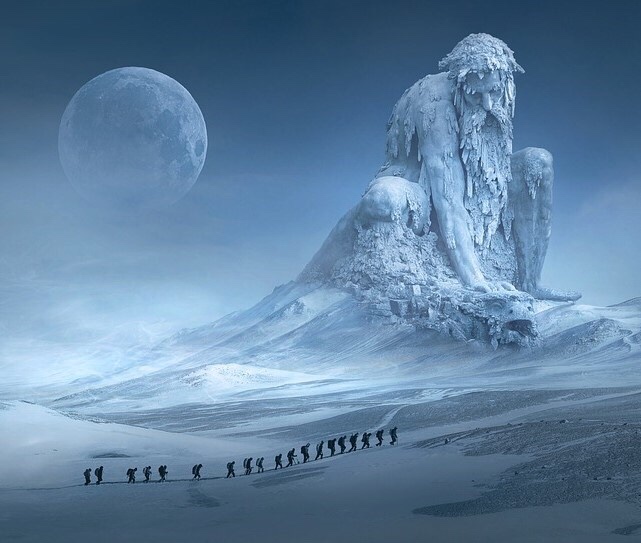 Gnuri, the ice giant was born in a galaxy on the other side of the universe. His form was created by the unknowable and contained enough material to birth entire new galaxies.

Filled with subatomic particles that were programmed to morph into structures, Gnuri was dispatched to what we now know as the Milky Way.

One particular paradox was that Gnuri could not see himself. While the particles he contained created external structures on auto pilot, he could not see the wondrous Milky Way, nebula nor planets that formed.

It was with this realization that his new form was born. The form of man. At that time there were only exoplanets, which meant that the form of man preceded the Milky Way’s Sun. However, man would need the Sun to generate life form. But when the Sun was created, Gnuri began to melt in a process that took billions if not trillions of years, and Earth was yet to be created.

As aeons continued to pass, and celestial bodies formed, Gnuri became weaker and weaker. In desperation he called upon the Gods that ruled the sky.

Gods were supercharged energy particles. One could say they were agents of super-charged propellents. They began to grow in numbers, and became more and more powerful as celestial bodies formed. There were God’s that ruled galaxies, stars, and planets.

Of course there was chaos, ruling God’s fought amongst themselves and had no time to bother with Gnuri.

Eventually, one God named Odin conquered all the others and became the only God to rule the universe. This was the prime outcome for Gnuri as it meant that help was on the way.

Finally, Odin, upon hearing Gnuri’s cries, invoked a huge galactic wind, and erupted earthquakes on the planet Earth to form what is now known as the Galdhopiggen Summit in Norway. Odin then moved Gnuri from a central cluster of nebula to reside upon the summit of the ice mountain.

Gnuri’s form as a celestial cloud of nebula transformed to that of a giant old man. Here Gnuri thrived for millions of years, and helped to shape man’s idea of what God looked like. Early man began praying to Gnuri, thinking he was in fact Odin. As humanity developed into agrarian societies, people from close and afar would trek thousands of miles in pilgrimage to visit with God.

Gnuri began to see himself through the image of mankind. Through their eyes, he was able to see the Earth and all of its life forms. From far and wide, every corner of the Earth would exist in his intergalactic mind.

However, because Gnuri was not actually a God, he could no longer contain the enormity of what he was able to see.

The only path forward was his own death. What was once his purpose was transferred to mankind who now embody Gnuri’s energy and subatomic particles.

The way back home to the unknowable is now in the hands of humanity. The expanding universe is in mankind’s care.

While humans are fragile and as small on the Earth’s surface as a gnat on an elephants ass, they have the power within to move mountains.